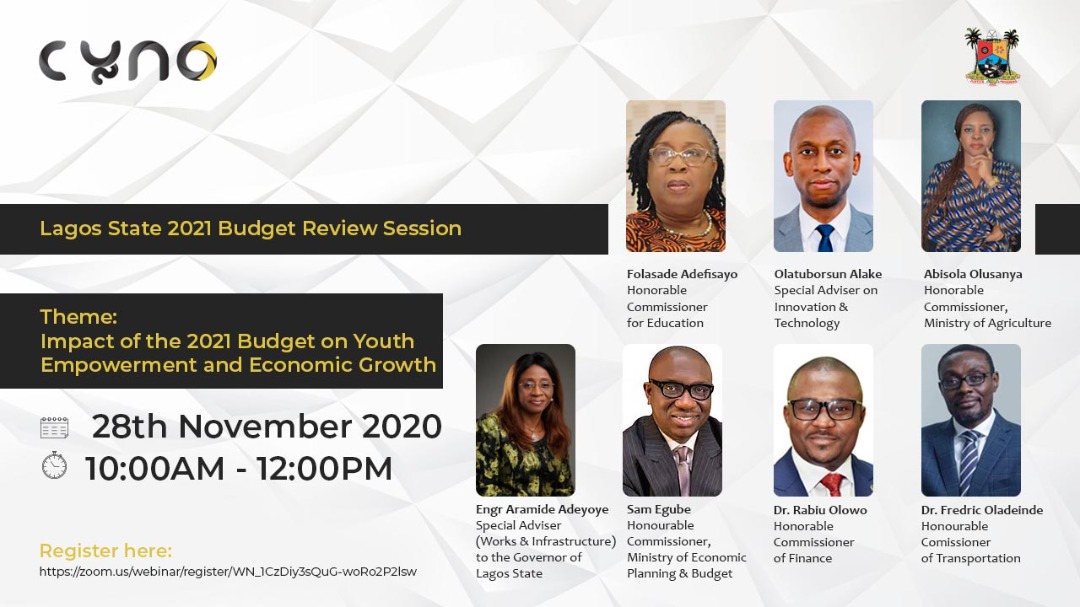 Cyno group, a leading content creation and digital strategy company in Lagos on Saturday, 28th November, hosted the Honorable Commissioners of Governor Babajide Sanwo-Olu’s cabinet to a virtual event to further address the allocation of the N1.15 trillion budget unveiled by the governor.

The one-day event with the theme “Impact of the 2021 Budget on Youth Empowerment and Economic Growth” provided a platform for the governor’s team to enlighten the general public about the budget allocation and provide an outlook on what to expect from the Lagos State Government in the coming year.

The Honorable Commissioner, Ministry of Economic Planning and Budget, Sam Egube, kicked off the virtual event by addressing the T.H.E.M.E.S agenda set up this year to address sectors that the government felt were lagging and plans set in place to make the state a 21st century

He stressed the government’s commitment to improving technical education, security, ease of doing business and early childhood education to prepare people, digitize governance and the economy to help the state of Lagos become a hub of technology. The performance of the 2020 budget ‘Budget of Reawakening’ was discussed during his presentation, highlighting its achievements, challenges, what ways the government plans to use the 2021 budget and what to expect coming out from a recession.

The Honorable Commissioner of Finance, Dr Rabiu Olowo, also spoke about the 2021 budget, referring to it as an opportunity to re-examine and turn the fiscal model into one capable of rebuilding Lagos. He highlighted the objective of the Ministry of Finance on Lagos State, its revenue performance and the restructuring of state loans.

“We successfully restructured all internal loans. At that time we were hovering around 20%, 18%, 19% within the first phase of restructuring we brought those loans down from 20% to 14%. And with the current economic reality, we went into a negotiation with our financial institution. Today, I can tell you we have our existing loans payment at 12%”

The Commissioner of Finance also addressed the Lagos State debt sustainability program to calm the fears of the citizens.

“One of the most common questions that people ask is that what is happening with debt, why are we borrowing money even when the economy is not so good. One of the most important things that people need to understand about debt sustainability is that today the debt sustainability ratio for Lagos is about 22% and the benchmark is about 40%. As it is today, we are doing very much lower than the headroom that we have and given the 2021 budget figures in terms of revenue and what borrowing we want to do, we will be bringing that number down to 17% if we take together the entire total revenue ratio” he said.

The Finance Commissioner, Dr Rabiu Olowo, concluded by shedding light on the plans the government intend to achieve in five years for Lagos internally generated revenue to reflect the size of its economy.

The Honorable Commissioner Abisola Olusanya of the Ministry of Agriculture addressed the contribution of agriculture in Lagos State, the effects of the absence of food in the State and its impact on the overall economy.

Speaking on the low contribution of the States towards agriculture in Nigeria and Africa, with the use of statistics, the Commissioner supported her statements and explained the six strategic pillars which the government plans to strengthen and impact the agricultural sector to rebuild Lagos by 2021.

“First and foremost would be the Imota rice mill which we are building and it is almost at completion level; when this administration took over it was roughly at about 10% levels in of completion but as I speak today, we are roughly about 85% completion and I can assure you that before the end of Q1 2021 this mill will be ready to go live and ready for the processing of rice”

She further shared the government’s achievements in empowering, educating fishermen, farmers and small businesses for the agricultural space this year and ensuring they have placements in regards to jobs and how their2021 plans for change will be implemented.

“Our website should be coming up in December to act as an information portal. Everything we have, everything we’ve seen as opportunities for the private sector to collaborate or work with us such that everyone begins to see

The Honorable Commissioner of Transportation, Dr Fredrick Oladehinde, started his presentation by outlining the vision of the state for 2020/ 2021 which was to build a multi-model integrated transport system that gives people alternatives once the roads are blocked. He defined transportation as the engine of any economy, using statistics to highlight the problems of the state and explore ways of making it a smart city in a sustainable way.

“Lagos state has developed a strategic transport master plan for the next 20 years that shows the kind of infrastructure that is required and the services that show that we can move people in a seamless manner. We are planning to develop several railways for Lagos State, 14 BRT’s, 26 water routes.”

He spoke about designing the system in such a way that one ticket can be used for various modes of transport and constructing a new Lagos, where each resident will have a transport station within 500 meters of where they live. Using significant scenarios, he addressed the transport management in Lagos and ways the current administration is working on reconfiguring sixty roundabouts and junctions which once served as a solution, but over time have become gridlock points to accommodate the growth in the state. He also announced plans to build a 450 passenger rail line to enable commuters to travel around Lagos in minutes.

He acknowledged that commuters might be worried as to what plans the government have put in place for Okada’s and tricycles because they were not included in the state’s vision. He then announced that the government plans to launch LASMAG which would provide commuter’s access to inner communities.

He further shed light on the ongoing projects carried out by the Lagos State Government in terms of innovation and technology, such as the metro fibre project, which will help minimize expansion cost for private and small players to produce better results and participate in the deployment of infrastructure.

“One of our objectives is not just to be technology adopters but technology creators. Last year we launched our Lagos State science and innovation council, the council that is responsible for intervening and raising the level of scientific research and development in the state and in August of this year we awarded about N100 Million to sixteen research initiatives across our universities.”

This he said, is to raise the level of patents in the city to create long-term value in the space of innovation and technology in the state.

Engr. Aramide Adeyoye, The Special Adviser on Works and Infrastructure, in her presentation began by stating the challenges the state had faced before their tenure. She stated that Lagos was popularly known as “The city of portholes” before a state of emergency was declared on the situation of the roads in October last year. She went on to discuss the short and long term plans The Lagos State Government had in line with the T.H.E.M.E.S agenda.

“ All of the things we did were in line with two things in mind, that we would improve connectivity and reduce travel time ultimately to improve the social-economic wellbeing and benefits for people and of course the ease of doing business becoming easier and faster”.

“When we came on board there were 253 stocks of projects on the ground. Today, about 47 projects of the 253 have been cleared 38 of those projects have been completed and in two weeks you will see us completing the other 9” she said.

Engr. Aramide Adeyoye concluded her presentation by discussing the government’s plans to construct more roads, open up alternative roads to provide connectivity in the state, highlighting the completion of the existing projects and ways to effectively empower the youth’s thorough internships.

Following the presentations, attendees of the virtual event were allowed to ask questions, many of which the Lagos State Government team replied succinctly.

A recording of the session can be found here.